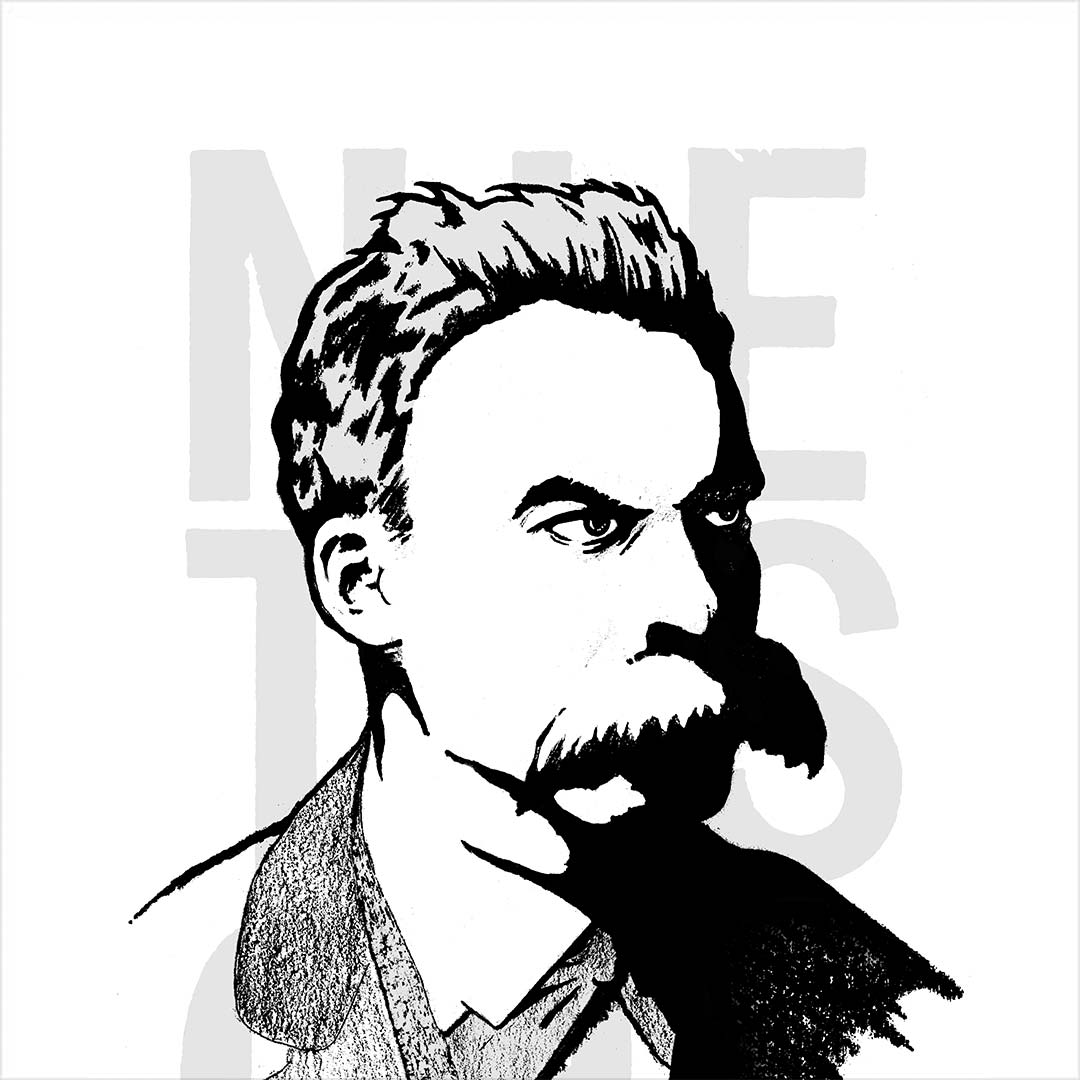 J.Gilman’s latest limited edition print release pays tribute to the work of Friedrich Nietzsche. In his approach to art-making, J combines typographical elements with detailed illustration. We spoke with J to learn more about his creative process and his thoughts on the work of the German philosopher.

What about the work of Nietzsche inspires you
and your work?

I'd say it was his fearless examination of human thought and behavior. I've been a fan of his since I was six years old and read one of his most famous quotes at the beginning of Conan The Barbarian. Since then I've always associated his work with strength, and thanks to that movie, I stll hear pounding kettle drums and trombones when I read him.
He left his home in Germany to go live in the mountains of another country and focus on trying to figure out what it meant to exist as a human. That took a lot of courage, especially with the health problems he had. There were no psychologists in the late 1800s, but his exploration and study of the human mind makes him an early forerunner of that discipline.

If critical thinking were a person, it would look a lot like Friedrich Nietzsche. He was critical of almost everybody and their ideas. He was an advocate for humanity above all else and, at the same time, an ardent skeptic of what it had accomplished and its motivations for doing so.

For Nietzsche, the individual was paramount. He believed that happiness wasn't compatible with being comfortable and that to live an authentic life meant to live dangerously.

Drawing is just a process of correcting your mistakes.

You mentioned previously that your process involves multiple revisions until you’re fully satisfied.
Could you walk us through your creative process?

First, I start with some pencil sketches. Usually three or four, around 30-minutes to two hours each. Once I have one I like, with good proportions, with a close to recognizable face, I'll scan that, print some copies from a laser printer at thumbnail size, and ink them a few different ways. Sometimes my "inking" is just using 9B pencils or black conté crayons for the shadows. I'm actually not very good at traditional inking, which I have a lot of respect for. It's very easy to ink the life right out of a great pencil sketch.

Next, I'll pick my favorite inked sketch and put it on the wardrobe opposite my bed so it's the last thing I see at night and the first thing I see when I get up. This is a key part of the operation for me. You should love your work the more you look at it. If you dislike it a little more every time you see it, something is off. There's a lot of intuition at this stage and you just have to trust it.

"Art is the proper task of life."
—Friedrich Nietzsche

Looking at an illustration with fresh eyes in the morning light can really highlight necessary adjustments.

When I see something I don't like, I'll grab my whiteout pen, pencil, or marker and fix it as soon as I see it hanging there. Scan that, print, and repeat. If some part needs a complete rework, I'll put tracing paper over it and redraw the whole thing. Drawing is just a process of correcting your mistakes.

This part of the job can go on for a while, because once you change one thing, that will throw off everything else a bit, especially if it's a portrait that has to look like a specific human. If it's an animal portrait, nobody is going to know if you captured an accurate likeness of the bird or snake. On top of that, if that human has their own art, or creative voice, the illustration style should reflect that. Nietzsche's writing always struck me as a man who had a mind in flames, so I drew his hair like fire. Because he was such a universal critic, I saw him with a skeptical but determined countenance.

The type you’ve incorporated has an interesting story behind it. Can you tell us about how you go about incorporating typography in your work?

Type seemed like an appropriate background for a writer. Since his most well-known book was Also sprach Zarathustra, published between 1883-1885, I set his name in the same typeface used for the book name on the title page of the first edition.

This was a really fun part of the project because I got to pore through old 19th-century type sample catalogs to locate the metal-cast type that would have been used at that time and place. Books were usually published locally to the author because everything had to be delivered by hand and the printer probably set the type straight from the author's hand-written pages.

The face is called Steinshcrift and was first produced by the Haas type house in Switzerland around 1860. Nietzsche wrote the book in Sils Maria, Switzerland and spent some of his most productive years there, walking in the mountains.

Incidentally, he indirectly shows up in another movie because of this book. Composer Richard Strauss was so influenced by the book that he wrote a piece of music about it which was eventually used as the theme for 2001: A Space Odyssey.

In a hyper-politicized year, a lot of groups from all sides seem to take from the work of Nietzsche.
What are your thoughts on this?

He was a cultural critic and disliked most organized systems of thought like religion, politics, nationalism, socialism, stoicism, and democracy, seeing them as too confining for people to become their true selves by following them. For this reason, he never developed his own system of thinking or rules for how to live.

“I mistrust all systematizers and avoid them. The will to a system is a lack of integrity.”
—Friedrich Nietzsche

Essentially, you betray yourself by following someone else's system. As difficult as he recognized it would be, he thought that we should strive to create our own system of thought and behavior instead of subscribing to anyone else's out of convenience. He thought we should struggle to be our authentic human selves and take full responsibility for doing so.

Nietzsche is such a powerful, passionate, and evocative thinker that most anybody can read him and find themselves in his words. This is his strength as a philosopher, but it's also what makes his work so controversial. Many people who hold very different ideological views have experienced his writing and had the thought "He agrees with me!" and seek to claim him as an ally. I too had this thought many times when discovering even simple aspects that we had in common, like for example, he hated alcohol and only drank water. More often though, my reaction was something like "He stole my idea!" because he thought of my idea first.

Because of this tendency for his work to enmesh itself in those who read it, I believe he's often misinterpreted. If you think Nietzsche belongs to you and your ideals, read more of him. If you think he belongs to somebody else and their ideals, keep reading. Eventually, he'll tell you why those people don't have it right.

Favorite Nietzsche quote and why?

It's tough to pick a favorite, but this one from Coming to America is pretty good.

This print release will feature a Warm Grey edition of 50 and a variant Metallic Silver edition of 20.

Available at dangerprints.com on Friday, October 23 at 12:00 Noon EST.

To see more of J's work, visit jgilman.com
You can also find J on Instagram

José takes pride in printing your posters and fine art prints. If he’s not in the shop you can find José at a photo session, drawing and designing at home, or spending time with his loved ones. 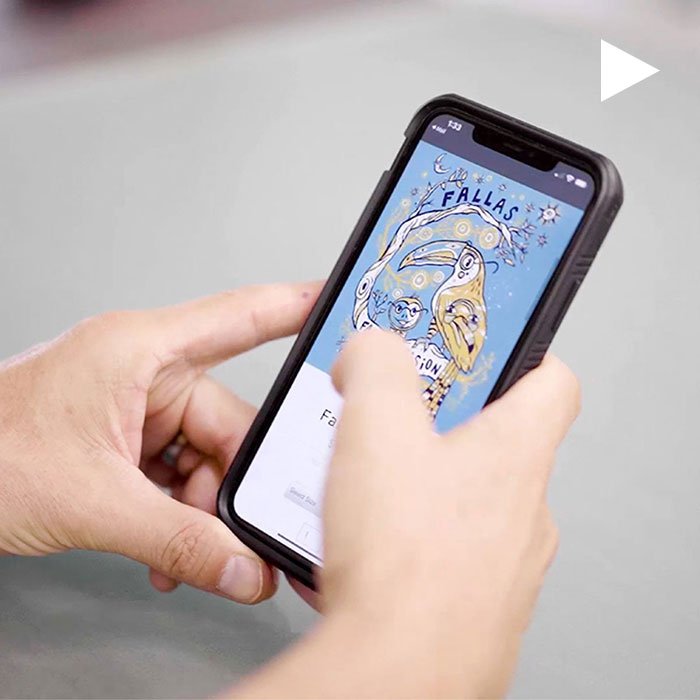 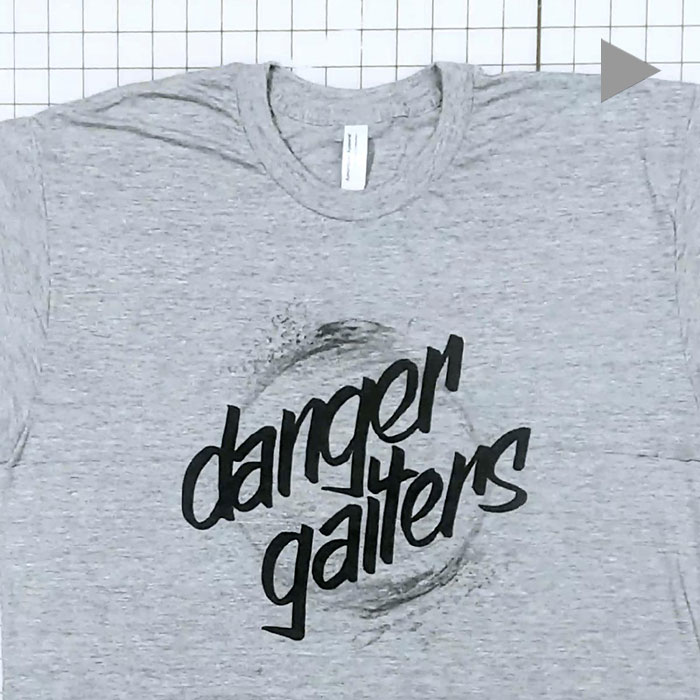 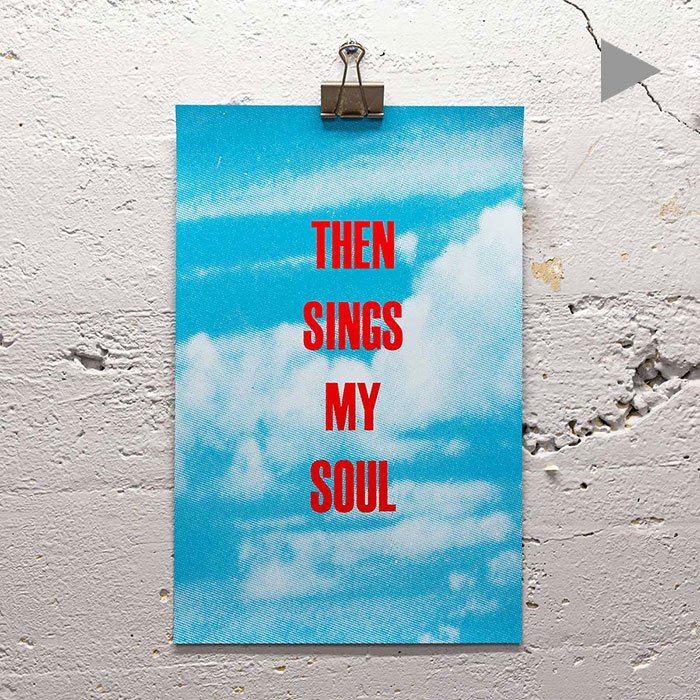 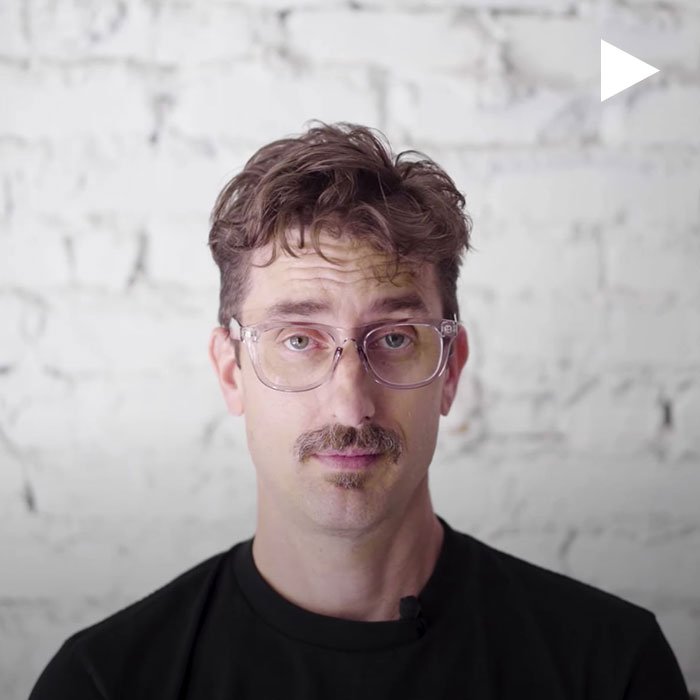 What’s the difference between Screen Printing and DTG?